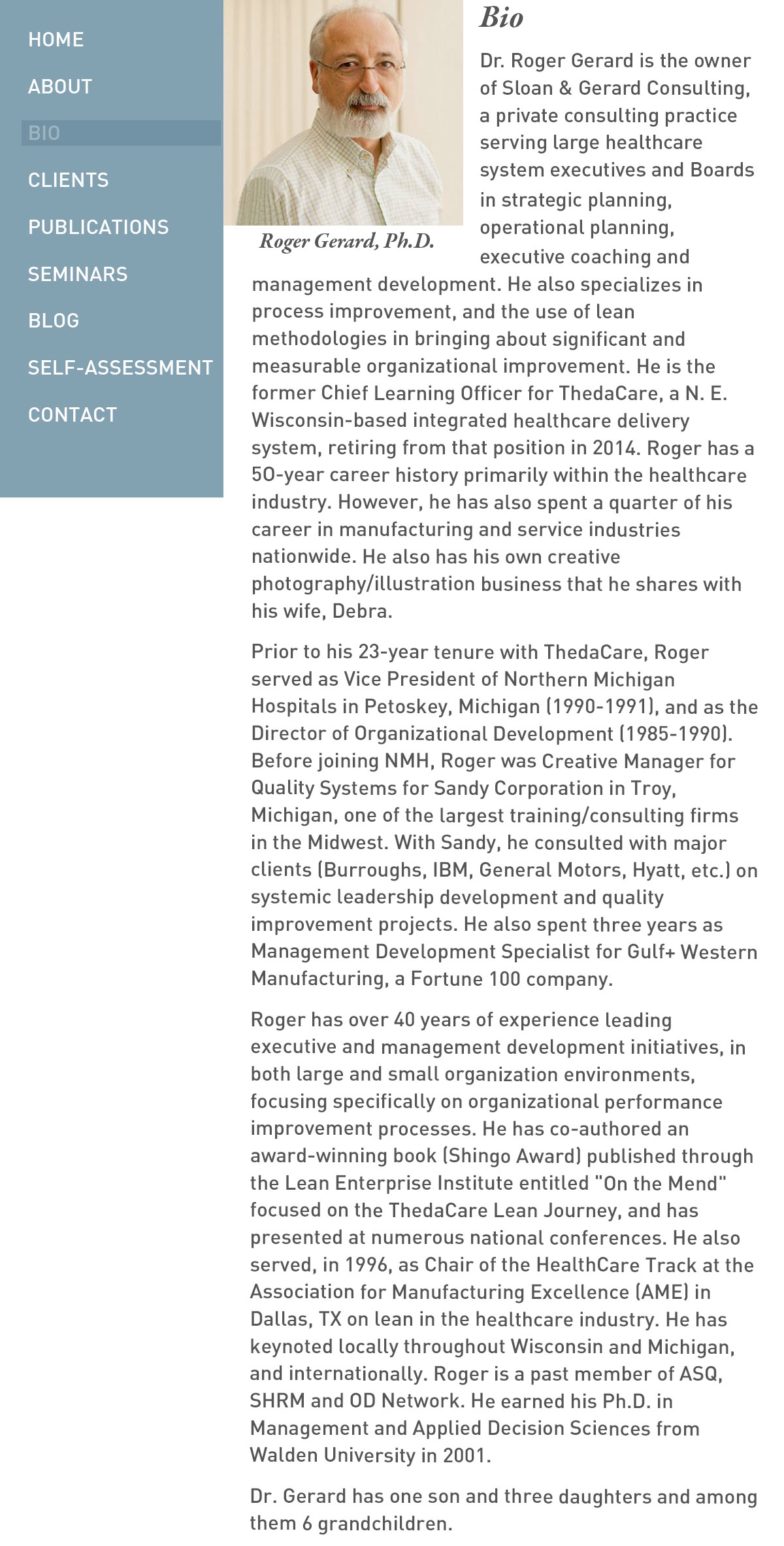 Bio, Dr. Roger Gerard is the owner of Sloan & Gerard Consulting, a private consulting practice serving large healthcare system executives and Boards in strategic planning, operational planning, executive coaching and management development. He also specializes in process improvement, and the use of lean methodologies in bringing about significant and measurable organizational improvement. He is the former Chief Learning Officer for ThedaCare, a N. E. Wisconsin-based integrated healthcare delivery system, retiring from that position in 2014. Roger has a SO-year career history primarily within the healthcare industry. However, he has also spent a quarter of his career in manufacturing and service industries nationwide. He also has his own creative photography/illustration business that he shares with his wife, Debra. Prior to his 23-year tenure with ThedaCare, Roger served as Vice President of Northern Michigan Hospitals in Petoskey, Michigan (1990-1991), and as the Director of Organizational Development (1985-1990). Before joining NMH, Roger was Creative Manager for Quality Systems for Sandy Corporation in Troy, Michigan, one of the largest training/consulting firms in the Midwest. With Sandy, he consulted with major clients (Burroughs, IBM, General Motors, Hyatt, etc.) on systemic leadership development and quality improvement projects. He also spent three years as Management Development Specialist for Gulf+ Western Manufacturing, a Fortune 100 company.
Roger has over 40 years of experience leading executive and management development initiatives, in both large and small organization environments, focusing specifically on organizational performance improvement processes. He has co-authored an award-winning book (Shingo Award) published through the Lean Enterprise Institute entitled “On the Mend” focused on the ThedaCare Lean Journey, and has presented at numerous national conferences. He also served, in 1996, as Chair of the HealthCare Track at the Association for Manufacturing Excellence (AME) in Dallas, TX on lean in the healthcare industry. He has keynoted locally throughout Wisconsin and Michigan, and internationally. Roger is a past member of ASQ, SHRM and OD Network. He earned his Ph.D. in Management and Applied Decision Sciences from Walden University in 2001.
Dr. Gerard has one son and three daughters and among them 6 grandchildren.